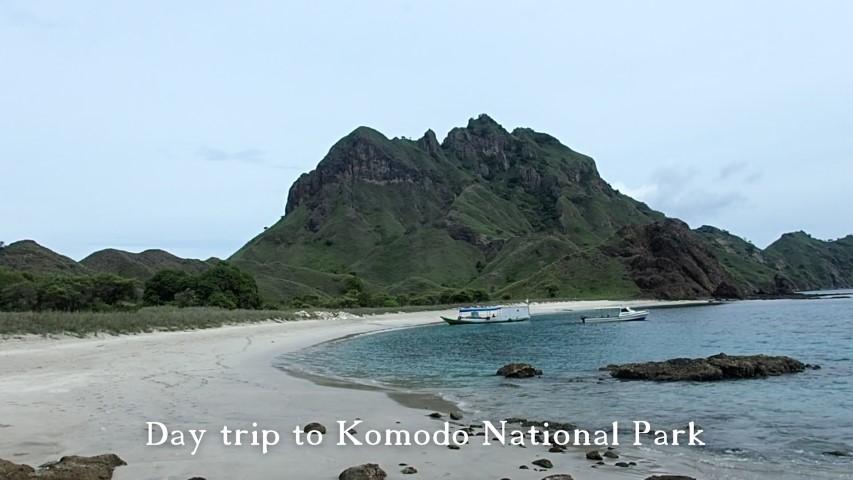 The most popular day trip available from Labuan Bajo is the boat trip into Komodo National Park.

There are many tour and boat operators that offer the same day trip. It costs around 600,000Rp per person to join a group boat trip to visit Komodo National Park to see the Komodo Dragons. The tour also stops at Padar Island and also stops snorkeling at Pink island and Manta Point. This price is for a tour on one of the slow boats. There are also tours that go by speedboat which costs more. There are also liveaboard boats that do the same route but at a much slower pace and you sleep aboard the boat over night.

The itinarary for these day trips to Komodo National Park is pretty much the same as what is outlined below. This day trip is a full 12 hour trip leaving at 6am and arriving back in Labuan Bajo Harbour at around 6pm. Prices quoted are average prices and depends on your bargaining skills. There are plenty of tour companies located within the town centre of Labuan Bajo that can arrange these day trips for you.

Pick up from your hotel around 5.30am.

The boats leave Labuan Bajo Harbour at around 6am.

From the harbour it is around a 3 hour boat trip to the first stop of Padar Island.

It takes around 20 - 25 minutes to climb to the peak to see the view. All up you have around 1 hour on Padar Island before the boat leaves to go directly to Komodo Island.

If you are not keen to climb to the top of the peak, the boat harbour on Padar Island is right next to a beautiful white sandy beach.

The boat ride from Padar Island to Komodo National Park takes around 1 hour.

Once you arrive on Komodo National Park, you first have to report to the Visitor centre and pay the National Park fee which costs 230,000Rp per person for foreigners. Local Indonesia have a reduce price for entrance to their own National Park (sorry not sure what the local Indonesian price is).

You are then assigned a treking guide (included in the cost of the park fee) who will take you for a short trek around Komodo National Park looking for Komodo Dragons. There are a few different treks which range in distance from 45 minutes walking, 1 hour walking up to 2 hour trek. For the day tour, you only have around 1.5 hours on Komodo Island so you are limited to the shorter treks.

Right at the end of the trek you come to a large clearing, close to the visitor centre, and right next to the beach front. Here there are many large Komodo Dragons that are just laying around sun baking. If you are lucky enough you may see them walking around.

At the end of the 1.5 hours on Komodo Dragon we returned to the boat to enjoy some lunch which was included in the cost of the day trip.

The snorkeling equipment is included in the price of the day trip. If you are not a good swimmer they can provide you with a safety vest which will help you to float while you are snorkeling. The depth of the water is a few meters deep so you are not able to stand in this area.

Once the snorkling is finished at Pink Beach, you get back on the boat for a 1 hour boat trip around to Manta Point.

Manta Point is an area of the sea at the northen tip of Komodo Dragon where the amazing Manta Ray come to be cleaned by the cleaning fish. They will visit this area several times a day for the cleaning fish to clean out their gills and their skin.

The water at Manta Point is about 5 meters deep and the water can be a bit rough with small waves so best to only go in if you are a strong swimmer.

I visited in the rainy season and the visibility in the water was not the best. During the wet season when there are large storms, alot of rubbish and polution washes down from the various islands of Indonesia and polute Manta Point which is so sad to see. On this day I saw more plastic bags and bottles than I saw fish.