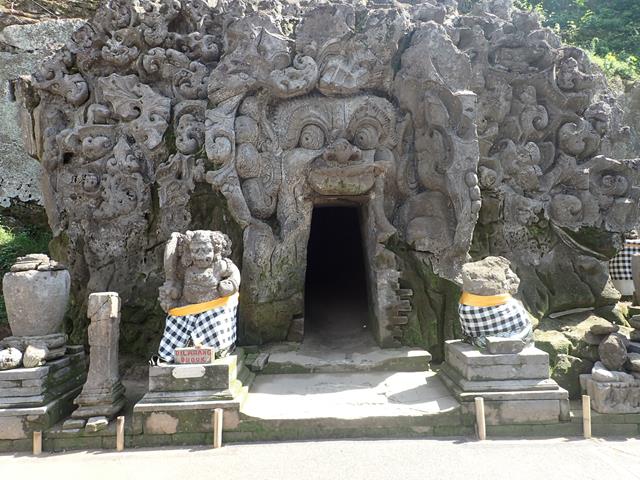 Goa Gajah (Elephant Cave) is a Hindu temple located very close to Ubud in the hills of Bali, around 1 hours drive from Kuta or 50 minute drive from Sanur.

Goa Gajah has some important Hindu shrines located with a small cave which has been used by Hindu worshippers for meditation since it was built in the 9th century.

Located around 10 minutes drive from Ubud, Goa Gajah has the name of Elephant caves but there are not elephants to be found here, just the many Hindu shrines in the small cave and around the temple grounds. There is a large stone statue of an elephant at the entrance to the Hindu temple but no real elephants.

Entrance to the Goa Gajah Elephant Cave Temple costs 15,000Rp for adults and 7,000Rp for children. You need to be suitably dressed to enter this Hindu Temple as with all Hindu temples in Bali. You need to have your legs and shoulders covered, so wear long pants and a tshirt (no singlets). If you are wearing shorts (it is hot in Bali) then the price of the entrance fee also includes the use of a sarong to wrap around your waist which covers your legs. 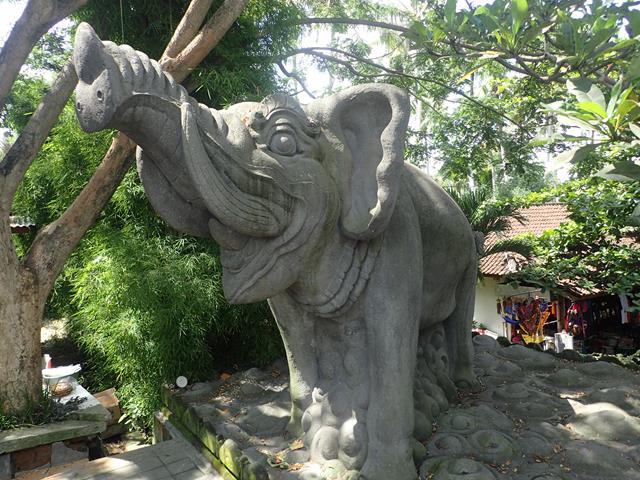 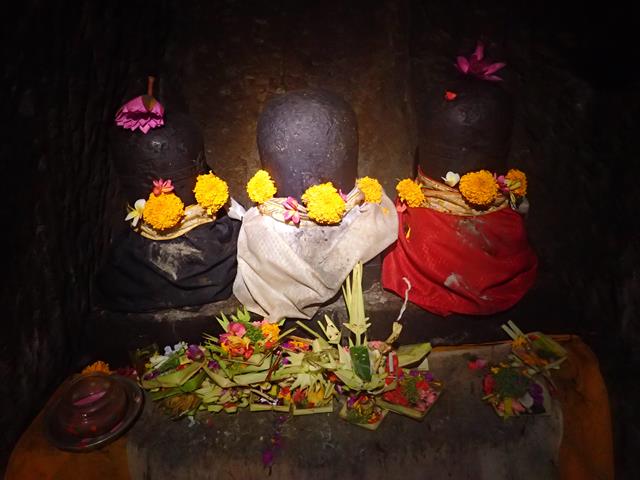 When you walk inside the cave, there are small ledges along the passage way where the Hindu worshippers would sit and meditate.

The cave is only small, with a passage around 5 meters long and then an intersection where you can turn left of right. Each way is only a few meters long with a small shrine at the very end

If you turn to the right then you come to the most important shrine at Goa Gajah, which is the shrine to the holy Hindu Trinity, the 3 main Gods of the Hindu religion, Brahma, Shiva and Vishnu, the Creator, preserver and destroyer.

The Goa Gajah Hindu Temple is located on grounds with 2 different levels. From the ticket office you walk down a series of steps to the main area of the temple. There are only around 50 steps to go down so not too tiring.

You first walk past a large stone fountain area which has natural spring water pouring in. This fountain is used by the Hindu worshippers to cleanse their body before they enter the cave for praying and meditation. 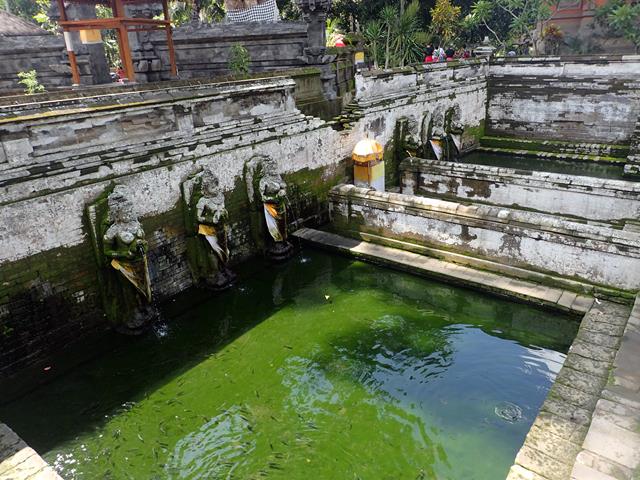 If you walk down the steps at the back of the temple grounds you go down to the very bottom section which has a small waterfall and creek flowing through. Next to here is a small Buddhist shrine which used to have small statue of the Buddha but the statue was stolen many years ago and never replaced.

Before you get to the ticket office you walk past a series of souvenir shops. If you walk past there wearing shorts the shops keepers will come and tell you that you have to wear a sarong to cover your legs. They will then conveniently try to sell you one of their sarongs. Remember the entrance price covers the cost of the hire of a saround. You purchase the ticket at one counter, then walk over to another counter where they collect your ticket and someone will then tie a saround around your waist if you are wearing shorts.

As well as the sarongs, the shops sell the usual I Love Bali tshirts as well as a range of nice Hindu and Buddhist souvenirs.